Macherla Niyojakavargam’s teaser will be out on this date
Published on Mar 27, 2022 8:58 pm IST 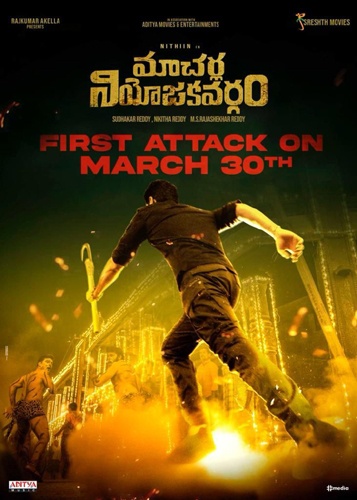 Young actor Nithiin will be seen next in Macherla Niyojakavargam. Directed by MS Raja Shekar Reddy, the movie’s first look was released yesterday and garnered a good response from the audience.

Now, the makers have announced that the movie’s ‘first attack’ (a teaser) will be out on the birthday of the actor i.e., on March 30, 2022. They have released a poster to announce the same.

Krithi Shetty and Catherine Tresa are the heroines opposite Nithiin in the movie billed to be a pucca mass and commercial entertainer with political elements. The movie also boasts of a stellar cast and will have leading craftsmen working for it.’

Sudhakar Reddy and Nikitha Reddy are bankrolling the project on Sreshth Movies in association with Aditya Movies & Entertainments. Mahati Swara Sagar collaborated with Nithiin for the third time, after Bheeshma and Maestro.