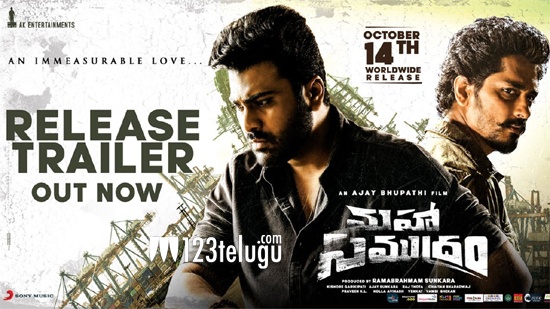 The much-awaited release trailer for Sharwanand, Siddharth, Aditi Rao Hydari and Anu Emmanuel’s upcoming romantic action drama, Maha Samudram, has just been launched during the film’s pre-release event in Hyderabad. The trailer showcases an intense and dramatic conflict between love and friendship that surrounds its lead pairs. Interestingly, Anu Emmanuel was nowhere to be seen in the trailer.

Going by the trailer, Maha Samudram’s story is entirely set in Vizag, with the Port area playing a vital role. While Sharwa plays a gangster named Arjun, Siddharth will be seen as SI Vijay, who is on a mission to nab Arjun. Jagapathi Babu as Chunchu, Rao Ramesh and KGF Ram will also be seen in crucial roles in this Ajay Bhupathi directorial. Anil Sunkara has bankrolled the movie, which is gearing up for release on October 14.