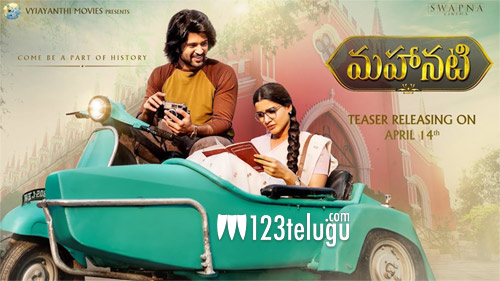 The first teaser of Keerthy Suresh starrer Mahanati is all set to be unveiled on April 14. Directed by Nag Ashwin, the film is a biopic of legendary actress Savitri and it also stars a galaxy of stars including Samantha, Dulquer Salmaan, Mohan Babu, Vijay Deverakonda, Malvika Nair, Prakash Raj among several others.

Recently, the makers had unveiled the first look posters of Samantha and Vijay Deverakonda, and both of them will be seen as journalists in the film. Their roles are crucial to the story since the story of Savitri is going to be narrated from their point of view.

Vijayanthi Movies is producing this bilingual film and it’s slated for release on May 9. More details about the film are awaited.