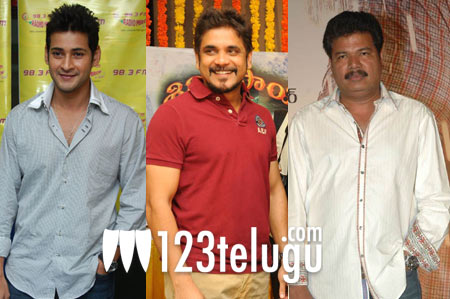 Accolades are pouring in for S S Rajamouli’s latest film Eega from all quarters. Few days ago RGV, Puri Jagannadh, Harish Shankar, Deva Katta, Siddharth, Ram and several other celebrities in Telugu film industry praised S S Rajamouli for his outstanding work in the film and now three of the biggest stars in the South have spoken about how much enjoyed the film. On July 8, Shankar saw Eega’s Tamil version at Devi Cineplex in Chennai and stated in the visitor book, “Naan Ee – Super Padam (Naan Ee – A super film)”. A snapshot of his signature and comments on the film are doing rounds all over the internet. And Mahesh Babu, who openly supports every film he thoroughly likes, reserved his best comments for Eega. “Eega will stand out as 1 of d greatest films ever made in the Telugu film industry. Take a bow ssrajamouli:)congratulations to the entire team…A special mention needs 2b made for sudeep’s performance…outstanding!!!” Mahesh Babu posted on Twitter. Nagarjuna too called Eega a landmark film and said, “Now I know what SS Rajamouli stands for, it stands for Sure Shot Rajamouli. Now with EEGA he’s become an icon for the telugu film industry!!” The film is doing phenomenal business in both Andhra Pradesh and Tamil Nadu. With no other big film lined up for release for another 2-3 weeks, it looks like Eega will spread its wings beyond imagination, if the ongoing buzz is anything to go by.