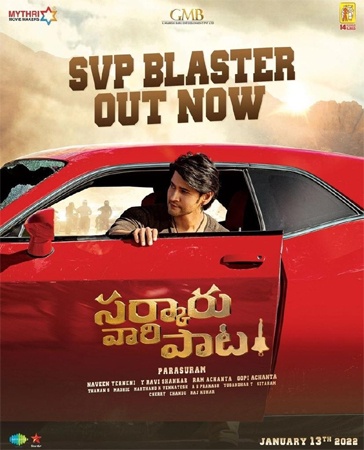 The most eagerly awaited Mahesh Babu Birthday Blaster from Sarkaru Vaari Paata was released in a hurry last night, following an unfortunate leak just a few hours prior to its official launch. The teaser is loaded with Mahesh’s heroism, and the actor takes the hype to the next level with his trademark swag.

While the blaster teaser doesn’t reveal much about the film’s storyline, Mahesh, as being speculated, will be seen playing a loan recovery agent. The teaser also offers a few glimpses of the breezy romantic track between Mahesh and Keerthy Suresh. Parasuram seems to be coming up with enough fan moments like he promised. Thaman’s blazing background score is yet another major highlight of the blaster teaser.

Sarkaru Vaari Paata is scheduled to be released as a Sankranthi festive treat in January next year. Mythri Movie Makers, GMB Entertainments and 14 Reels Plus banners are jointly bankrolling this high budget action entertainer.