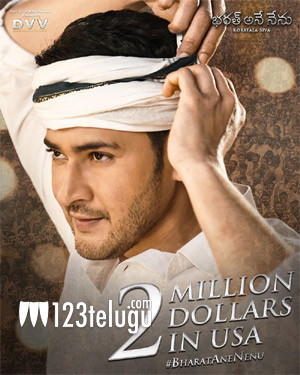 Superstar Mahesh Babu continues to display his authority over the US box-office. After a staggering $1.41 million start, Bharat Ane Nenu has breached the coveted $2 million mark on Saturday night.

As of 11 pm EST, Bharat Ane Nenu grossed over $600K to step into the $2M club. BAN is Mahesh’s second $2M movie after Srimanthudu. The film has pulled off this feat within just 2 days, a stunning feat only preceded by Baahubali 1 and 2.

Bharat Ane Nenu is currently 7th among the all-time highest grossing Telugu movies in the US. The film is expected to leave behind its predecessors like Srimanthudu, A..Aa and Khaidi No 150 on Sunday.