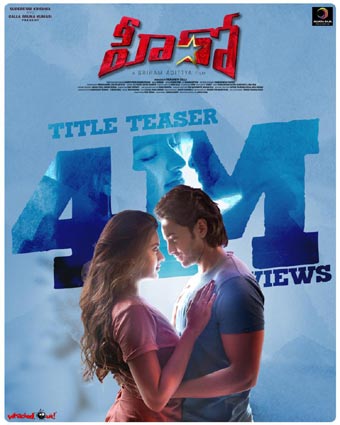 Hero Mahesh Babu’s nephew Ashok Galla is making his debut as a hero with the upcoming action entertainer, Hero. The film’s title and teaser were unveiled yesterday by the Superstar himself and it has been received well by fans and movie lovers, thereby trending at the number one spot on YouTube.

In just over 24 hours, Hero’s teaser clocked more than 4 million views on YouTube. This is an impressive feat by the teaser for a debut hero’s film. Ashok Galla’s confident screen presence in a cowboy avatar, action-packed thrills, the lavish visuals and Ghibran’s terrific background score were the major highlights of the teaser.

Hero has young beauty Niddhi Agerwal as the female lead. The film is being directed by Sriram Adittya and produced by Padmavathi Galla under Amara Raja Media & Entertainment banner. Ashok’s grandfather Superstar Krishna and father Jayadev Galla are presenting the movie.