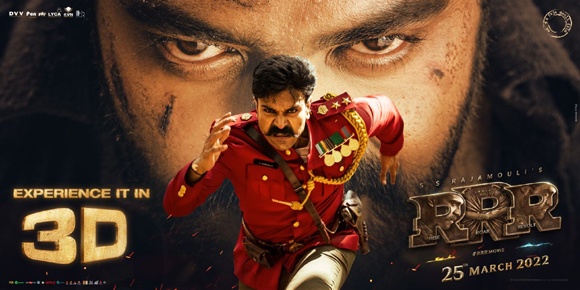 The most-awaited Tollywood biggie, RRR, is all set for a grand release in theaters worldwide this Friday. Directed by SS Rajamouli, the magnum opus has the star actors Jr NTR and Ram Charan as the lead actors.

The movie has garnered humongous attention from every corner and the makers have already planned to release the movie in a grand way. Team RRR has decided to release the star-studded action drama in various formats like Dolby Cinema, IMAX and 3D.

For the moviegoers in Telugu states, it is not possible to experience the high-budget movie in Dolby Cinema and IMAX. However, the audiences can experience the multilingual movie in 3D. A new poster has been posted by the team online to announce the same.

Alia Bhatt, Ajay Devgn, Samuthirakani, Shriya Saran, Olivia Morris and others are also a part of the movie. MM Keeravaani took care of the music while Senthil cranked the camera. Produced by DVV Danayya, the movie is scheduled to release in Telugu, Tamil, Malayalam, Kannada and Hindi.