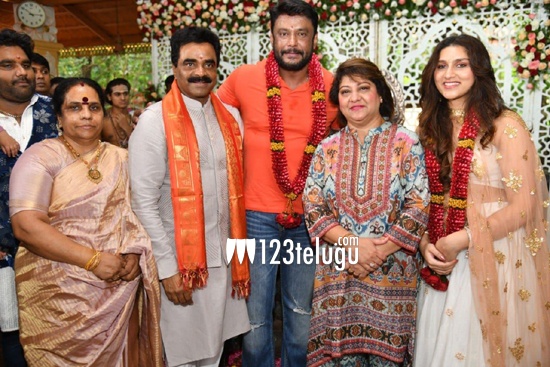 Famous producer and late Ramu and senior actress Malashri’s daughter Radhana Ram is getting introduced as a heroine with challenging star Darshan’s 56th film. D56 is the working title currently.

The pooja ceremony of this PAN Indian film is conducted at Shri Ravi Shankar Guruji’s ashram in Bangalore marking the Varalakshmi Vrata festival. The film is produced by the famous producer Rockline Venkatesh under the Rockline Productions banner.

Malashri has acted in many superhit films in Telugu. She has garnered the fan’s affection through her beauty and talent and has also entertained by acting in various lady-oriented films. Now her daughter is making her debut.

Speaking at the ceremony, Malashri wished her daughter to become a successful actress. Radhana expressed her happiness since she is getting introduced through Darshan’s film.

Robert fame Tharun Sudheera is helming this flick which is an action entertainer combined with a social message. Sudhakar Raj will crank the camera.