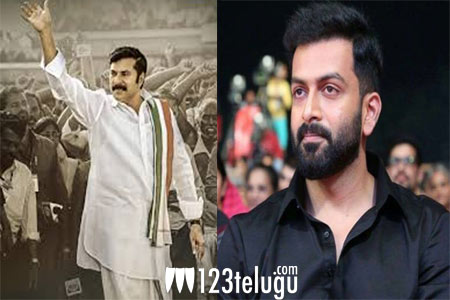 After a gap of more than two decades, Bollywood stalwart Mammootty is making a comeback to Tollywood with Yatra, the prestigious biopic on former Chief Minister of erstwhile Andhra Pradesh YS Rajasekhara Reddy. Mammootty has lent his own voice in the film’s Telugu version.

Now, much to everyone’s surprise, young Malayalam star Prithviraj Sukumaran took to Twitter this evening and showered praises on Mammootty’s command over Telugu language. “The command #Mammookka has over Telugu, and the subtlety with which he renders it is spell binding,” Prithviraj tweeted.

Yatra will be hitting screens worldwide on February 8. Mahi V Raghav is directing Yatra and Vijay Chilla and Shashi Devireddy are jointly producing the film under 70mm Entertainments banner.

Just saw a couple of scenes of #Yatra . The command #Mammookka has over Telugu, and the subtlety with which he renders it is spell binding. Looks great! @mammukka @YatraMovie PS: I know I’m not the greatest judge of Telugu language! Just saying what I felt 😊