Manchu Manoj Nominates Five Celebs For A Noble Cause
Published on May 23, 2017 5:58 pm IST 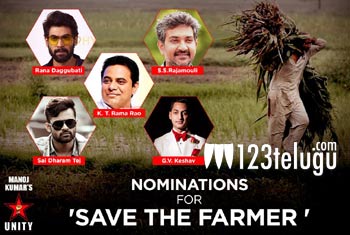 Ever since Manchu Manoj announced ‘Save The Farmers’, an initiative to help the farmers who are several financial distress, there has been a lot of speculation about what the actor’s next step is going to be.

Putting all the rumours to rest, Manchu Manoj has announced that he is nominating five celebrities – SS Rajamouli, Rana Daggubati, Sai Dharam Tej, KTR and GV Keshav, to contribute a day’s salary from their annual income to a fund that’ll be used for the welfare of the farmers.

“Hereafter, no plough should silently lay somewhere, no hard work of a single soil man should go in vain and no farmer should lose hope on his life,” Manoj said.