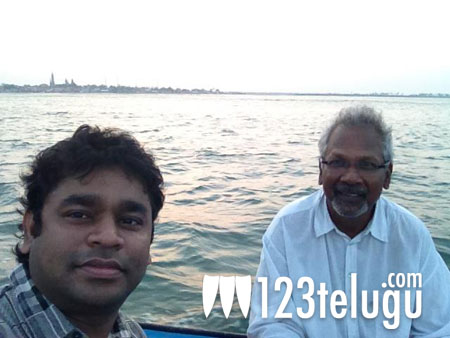 Filmmakers and music directors sometimes go an extra mile to discuss about the film’s music. We have heard of people heading to hill stations or sometimes even foreign countries, but Mani Ratnam and A R Rahman, two legends of Indian cinema, seem to be doing it differently. Mani Ratnam is currently filming his upcoming bilingual film ‘Kadal’ in Manapad, a village near Tuticorin. Earlier today, A R Rahman tweeted a picture of him and Mani Ratnam and both of them were reportedly brainstorming about the film’s song in the middle of the sea. The film is a love story which is set in a fishing village and it also narrates the problems they face. Gautham, Samantha, Lakshmi Manchu, Aravind Swamy and Arjun are playing important roles in this film.