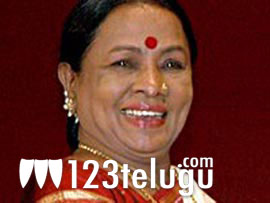 Veteran artiste Manoramma is undergoing treatment at the ICU of Apollo Hospitals in Chennai after she had a fall recently.Her acting career spans over five decades and she has about 1,500 films to her credit. She is also the Guinness record holder for acting in maximum number of films in the world.

Manorama slipped in the washing room and injured her head and knee. Doctors say that she suffered a severe brain trauma and Manorama has been in the ICU for the past four days.