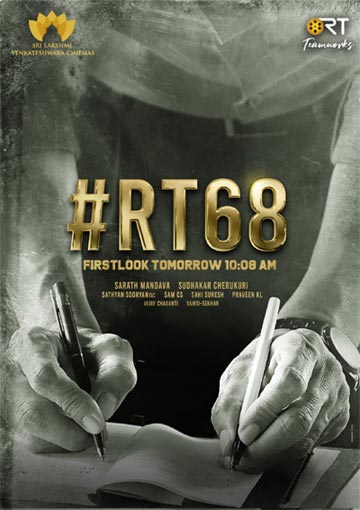 Here comes the mass update on Ravi Teja’s eagerly awaited 68th film. The makers have just announced that the film’s first look poster will be released tomorrow morning at 10:08 AM. The announcement poster features Ravi Teja’s hands, as he turns ambidextrous and scribbles something on a paper with both his hands.

RT68 is touted as an intense social drama set in the government office backdrop. Ravi Teja is said to be playing an MRO in this as-yet-untitled film. Majili actress Divyansha Kaushik is the film’s leading lady and debutant Sarath Mandava is directing the movie. Young Kollywood composer Sam CS is scoring the soundtrack and Sudhakar Cherukuri is producing the movie in association with RT Teamworks banner.