May be we were destined to work together: Mehreen on Vijay Deverakonda
Published on Mar 7, 2018 4:22 pm IST 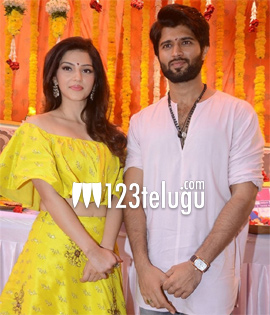 Recently, Vijay Deverakonda’s maiden Tamil-Telugu bilingual political drama was launched in style. Young beauty Mehreen Pirzada has been roped in as the film’s leading lady. Incidentally, Vijay and Mehreen had worked with each other in the Holi song directed by Vamshi Paidipally for the World Telugu Conference.

In a recent interview with a popular English daily, Mehreen opened up about teaming up with Vijay for the second time. “I shared pictures of Vijay and me from the sets of the Holi song just to create a buzz among my fans. It worked like a charm and a lot of people began asking if we both are doing a film. Back then, I brushed it off saying that it was just a song. But may be we were destined to work together, so here we are,” the Punjabi beauty said.

Mehreen is all praises for Vijay Deverakonda and calls him a brilliant and focused actor. “After Arjun Reddy, Vijay’s popularity has sky rocketed, especially among the youth. So I’m very kicked about sharing the screen with him. Anand Shankar of Vikram’s Inkokkadu fame is directing the movie and Studio Green’s Gnanavel Raja is producing it.