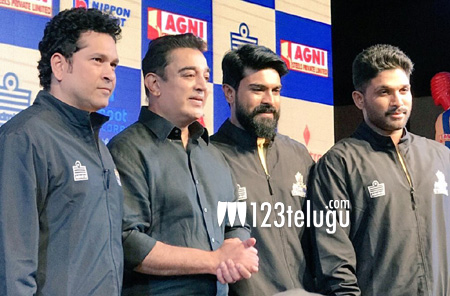 It’s clearly turning out to be a season of celebrities venturing into sports arena. Just days after news broke out that Rana is the co-owner of Baahubali Boxers, a team from South India, at Super Boxing League; the latest news is that the Mega Family, along with Sachin Tendulkar and Nimmagadda Prasad, now own a team in the Pro-Kabaddi League.

After Chiranjeevi, Allu Arvind and Nimmagadda Prasad teamed up with Sachin Tendulkar to buy the Kerala Blasters soccer team in the Football league, the group has set its eyes on the Pro-Kabaddi League. Ram Charan, Allu Arjun also joined the rest of the group to buy the Tamil Thalaivas group in the league and they have roped in Kamal Haasan as their brand ambassador.

At a star-studded event in Chennai, all of them appeared on stage to unveil the logo of Tamil Thalaivas and also spoke at length about their plans to take the brand forward in the Pro-Kabaddi league, which is going to take the audiences by storm in the new season.