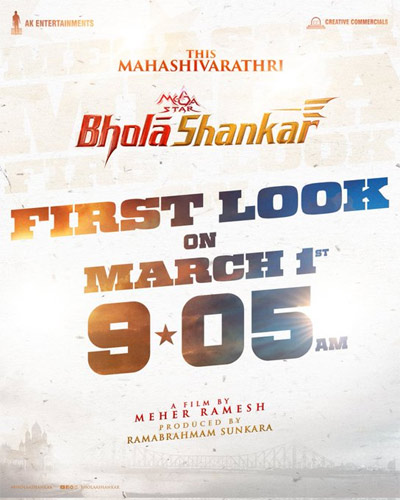 Megastar Chiranjeevi is currently busy shooting for Bholaa Shankar. Directed by Meher Ramesh, the movie’s team has released a mega-update about the film.

The makers took to social media and released that the first look of the mega movie will be unveiled on March 1, 2022, at 09:05 AM. To note, Chiranjeevi is playing the character Shankar in this high-budget movie.

Tamannaah Bhatia is playing the leading lady in this action entertainer. Keerthy Suresh will be seen as Chiranjeevi’s sister. Rao Ramesh, Murali Sharma, Tulasi, Vennela Kishore and others are playing key characters in this movie.

Produced by AK Entertainments, the movie’s music is composed by Mahati Swara Sagar. The movie’s release date will be announced in the coming days.

Get ready for the MEGA VIBE of #Bholaa⚡️