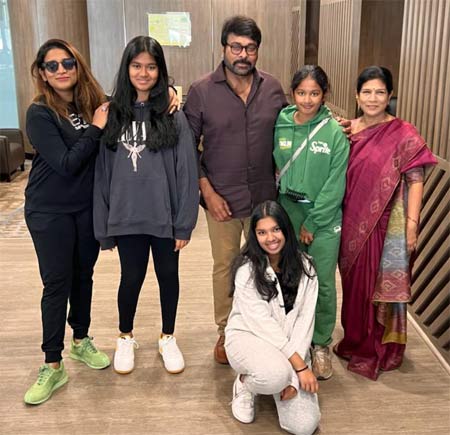 Megastar Chiranjeevi is all set to thrill the audiences with his upcoming film Waltair Veerayya which will hit the screens on 13th January 2023. The release date was announced yesterday, and fans are looking forward to the film.

Just now, the star actor shared a crazy post that is going viral. The actor is currently in Europe for the film’s shoot. He added a picture of having a fun time with his family and also shared a lovely pic with the film’s leading lady Shruthi Haasan.

He came up with a rhyming caption ” Family tho Vihara Yatra, Heroine tho Itu Veerayya Yatra.” The actor’s comic timing is once again seen in this post, and fans are just loving it. Ravi Teja plays a vital role in the film, which is produced by Mythri Movie Makers.