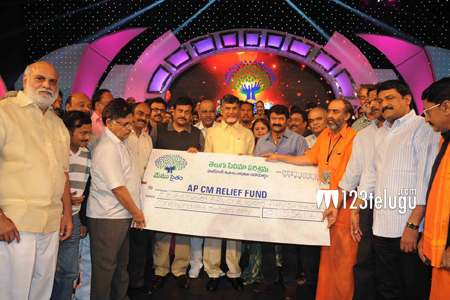 From the past two weeks, we had been bringing you continuous updates regarding the mega telethon ‘Memu Saitham’ which was planned in aid of the Vizag hudhud cyclone victims. The Telugu film industry attended in full force and made this event a grand success. Starting at 10 am in the morning the telethon went on till 11 in the night.

Star performances, Kabaddi, star cricket match and an hilarious Antakshari wrapped up the day’s proceeding. During the entire day, the Kabaddi match provided superb entertainment for the audience. The cricket with stars tournament was won by Nagarjuna’s team which was captained by Akhil. As the proceeding drew to an end, a cheque worth 11,51,56,116 crores was handed over to the Andhra Pradesh Chief minister Nara Chandra Babu Naidu towards his relief fund. Finally, whatever might be the situation, the Telugu film industry has once again proved that they stand united and work as a force for the well being of the society.