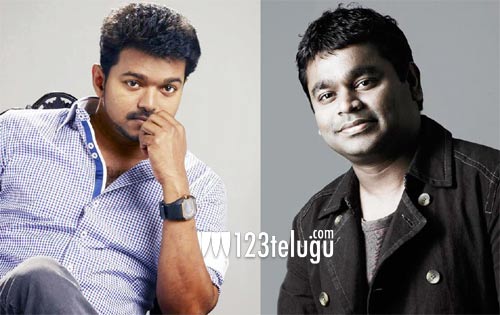 Tamil star Vijay and Oscar-winning music composer AR Rahman teamed up for the first time after 13 years and delivered a huge musical hit with Mersal. Especially, the Aalaporaan Thamizhan song became an anthem among Vijay fans.

Now, if the ongoing buzz is anything to go by, the Mersal musical combo is all set to repeat once again. Apparently, AR Murugadoss, the director of Vijay’s soon to be launched project, has been in talks with AR Rahman. However, Rahman is yet to sign on to dotted line.

The as-yet-untitled Thalapathy62 will go on floors from January 20. The film will be hitting the screens during Dasara, 2018. A happening young heroine has been roped in to play Vijay’s love interest. Sun Pictures will be bankrolling the project.