Mishan Impossible is not a small or multiplex movie – Chiranjeevi
Published on Mar 30, 2022 11:00 pm IST 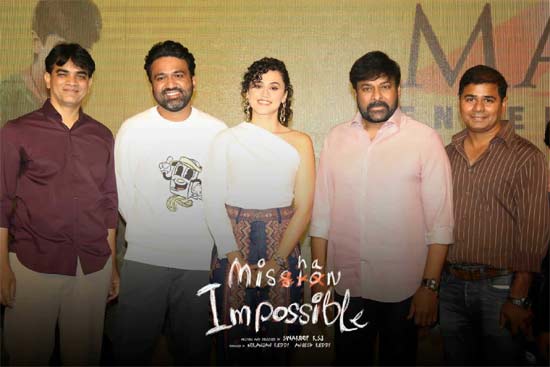 Mishan Impossible starring Taapsee Pannu in a lead role is slated for a theatrical release this Friday. On this occasion, the makers held a pre-release event and invited Megastar Chiranjeevi to grace it as a chief guest.

During the event, the star actor has said that he has watched the movie already and really enjoyed it. Speaking about the movie, Chiranjeevi has appreciated the lovely yet innocent performances of the child artists, who played key roles in the film. He also

Also, he appreciated the film’s director Swaroop RSJ for doing a wonderful job. Besides, he lauded all the technicians who worked on this crime comedy film.

Chiranjeevi requested audiences to not consider it a small or multiplex movie. He asked everyone to watch it in theaters and promised that the movie won’t disappoint anyone.