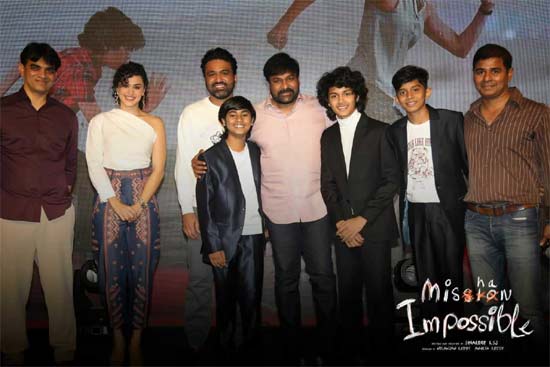 ‘Delhi Doll’ Taapsee Pannu-starrer straight Telugu movie, Mishan Impossible is all set for a grand release in theaters this Friday. Ahead of that, the makers have held a pre-release event in Hyderabad today and Chiranjeevi attended it as the chief guest.

This is the second movie of Swaroop RSJ who proved his skills with Agent Sai Srinivasa Athreya. Speaking about the movie, he thanked Chiranjeevi for gracing the event and also appreciated the producers and every other person who worked hard for this crime comedy flick.

Swaroop thanked Tapsee for agreeing to do the role even though it’s a small role. She acted very well in the movie and played an effective role, said the director. Talking about the child actors – Harsh Roshan, Bhanu Prakashan and Jayateertha Molugu, the filmmaker stated that this movie wouldn’t have happened without them. He appreciated them for their acting skills.