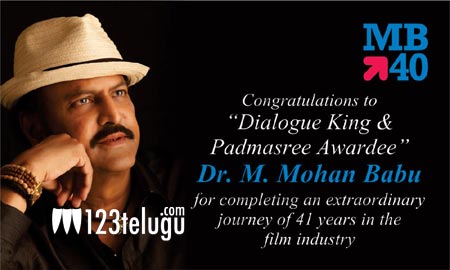 Padma Sree Mohan Babu completes 41 years in the Telugu Film Industry today. He entered into films as Bhakthavatsalam Naidu on 22nd November 1975 and grew into a formidable force with dedication and attitude. With over 560 films to his credit, the actor made a unique place for himself in the history of Telugu cinema by acting in a wide range of memorable characters.

His contribution to film industry was recently commemorated at the 63rd Filmfare Awards with a Lifetime Achievement Award and an honorary doctorate from the University of California, Berkeley for his contribution to cinema and education.

Mohan babu began his career as a Physical Education instructor at YAMCA college of physical education for many years, he joined Dasari Narayana Rao as a script writer after a long struggle in life. Swargam Narakam is the first breakthrough for Mohan Babu who is now a most respected name in South Indian film industry. He is addressed with different titles like Dialogue King, Collection King, Nataprapoorna, and Natavachaspathi.

Mohan Babu’s contribution to the educational field is huge as he established the Sree Vidyanikethan Educational Trust in 1993, providing free education for the poor is delivering efficient professionals to the Nation. Manchu Vishnu, Lakshmi Prasanna and Manoj, the three talented progenies from Manchu family are continuing a great legacy initiated by their father Mohan Babu.

Let us wish and congratulate Dr Mohan Babu garu on his successful 41 years of journey in the service of arts, culture and education. He is a pride for our Telugu people.