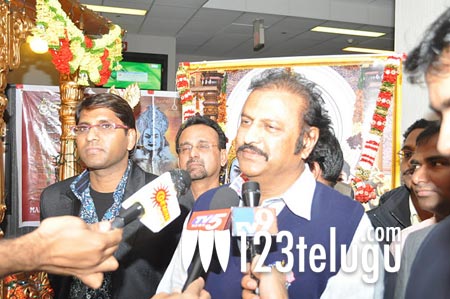 The race to the elections this year is turning out to be quite exciting to say the least. Apart from the politicians scrambling for attention from the voters, several actors and other members from the film fraternity are entering into politics like never before. Already, Pawan Kalyan and Nagarjuna met Narendra Modi and expressed their support to him and rumours are abuzz that few more actors will jump into this bandwagon.

Amidst all these developments, Mohan Babu and his daughter Lakshmi Manchu was caught off-guard when their names began doing rounds in political circles. Now, both of them denied these rumours and clarified that they are not going to contest in elections. “Hearing some absurd news coming in TV channels that I am getting ready to take a plunge into Politics. As of now It’s humbug! Unlike others, I don’t change my colours,” Mohan Babu posted on Twitter.

Even Lakshmi Manchu put the rumours to rest about her political entry and stated that she’ll continue supporting Modi. “I feel humbled that my wonderful fans and the media think I can be a good leader. With all due respect, I am NOT contesting 4 this election. I am and will continue to support the one and only @narendramodi. My family was the 1st in the film fraternity to have personally met with him,” she posted on Twitter.

We’ll have to wait and see who else comes forward to campaign for various political parties this election season.