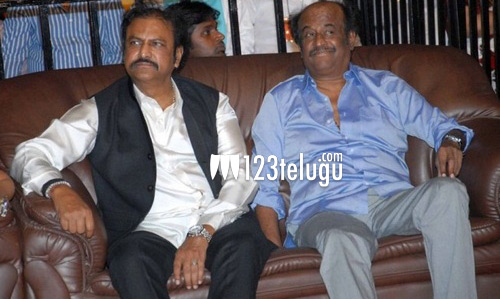 It’s going to be a star studded event if the list of guests is anything to go by. Yes, we are talking about the audio launch of Rajinikanth’s upcoming film Kochadaiyaan. Yesterday, we had reported that Shah Rukh Khan has been invited as a chief guest for the event and the actor was quite thrilled to be part of the ceremony.

The latest news is that Mohan Babu is also going to be one of the guests of honour at the event and he’s the only actor from Telugu film industry who has been invited as a guest. In fact, Mohan Babu is one of the closest friends of Rajinikanth and the duo make it a point to meet often. Since he’s quite close to Rajinikanth’s family, he immediately accepted to become a part of the audio launch in Chennai on March 9. The event will also see director Shankar, K Balachander, AVM Saravanan, Aishwarya Rai share the stage with the cast and crew of Kochadaiyaan.

K S Ravikumar has written the story and dialogues whereas Soundarya Rajinikanth has directed the film. A R Rahman has scored the music.