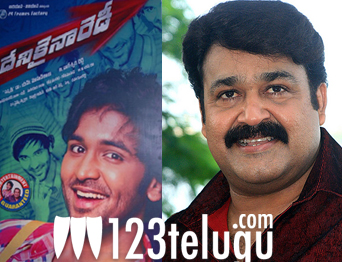 Vishnu Manchu has been putting a lot of efforts to promote this upcoming film Dhenikaina Ready and interestingly, he has managed to rope in leading actors from neighbouring states as well as a part of film’s publicity campaign. The film’s shooting was wrapped last week and immediately he flew to Bangalore to celebrate the audio’s success and invited veteran Kannada actor Ambarish and Sudeep to grace the event. After wrapping up the event, he flew to Cochin to attend the audio launch of the film’s Malayalam version which has been titled Endhenum Ready. It’s the first time a Vishnu Manchu’s film is being dubbed in Malayalam and he already seem to have fallen in love with their hospitality. Malayalam superstar Mohan Lal has launched the film’s audio in Malayalam and Vishnu tweeted, “Met MohanLal uncle. Sucha wonderful man. Gearing up for my audio launch in Malayalam at 7 today. Feeling nervous and excited!” Hansika is playing the lead role in this family entertainer. G Nageshwara Reddy has directed it and Vishnu has produced it on 24 Frames Factory banner. Chakri and Yuvan Shankar Raja has composed the music.