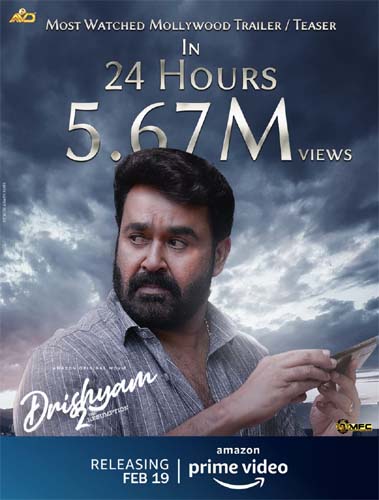 The trailer for Malayalam stalwart actor Mohanlal’s highly-anticipated thriller, Drishyam 2, was launched yesterday to a unanimous positive response. And within 24 hours, the trailer has smashed all the existing records in terms of YouTube views.

By clocking over 5.67 million views, Drishyam 2’s trailer has become the most viewed Malayalam movie trailer on YouTube and that too within 24 hours. Interestingly, the trailer has beaten Mohanlal’s Lucifer trailer to set a new record in Mollywood.

Directed by Jeethu Joseph and produced by Antony Perumbavoor, Drishyam 2 is a sequel to his 2013 suspense thriller, Drishyam. The film will have a direct release on Amazon Prime Video on February 19.