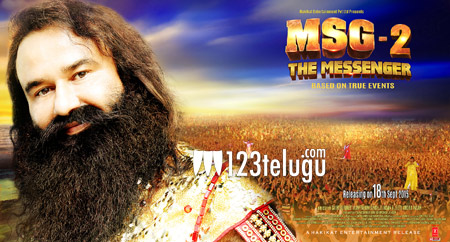 ‘MSG-2 :The Messenger’ is the sequel to the blockbuster film ‘MSG :The Messenger’. The film, an action drama with moralistic values, was directed by the Saint Gurmeet Ram Rahim Singh Ji Insan and Jeetu Arora Insan. The Hindi version of the film released on September 18th and raked in more than 100 Crores worldwide.

The film is now getting ready to hit the screens in Telugu on October 1st. Starring Saint Gurmeet Ram Rahim Singh Ji Insan, Arpit Ranka and Honey Preet Insan in the lead roles, the film was critically acclaimed for the sensitive portrayal of the evil effects on drug trafficking. The film was produced by Hakikat Entertainment Pvt. Ltd.