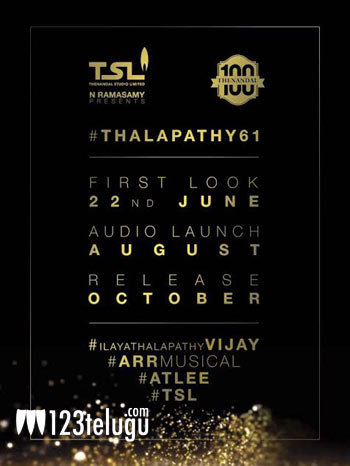 Tamil superstar Ilayathalapathy Vijay is currently busy shooting for his as-yet-untitled 61st project in young director Atlee’s direction. In the movie, Vijay will be seen in triple roles and he is romancing Kajal, Samantha and Nithya Menon.

Now, the film’s makers have just announced that the film’s first look will be unveiled on June 22nd. Furthermore​, the audio album, being scored by AR Rahman, will be out in August and the movie will hit the screens in October, tentatively as a Diwali treat.