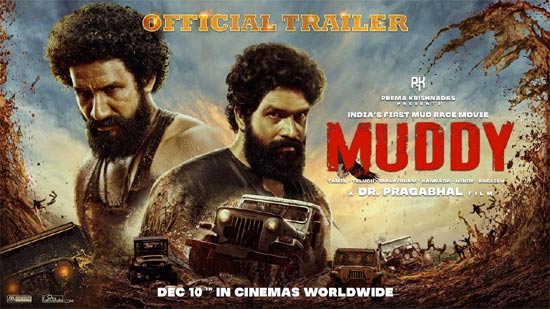 India’s first muddy race movie, Muddy’s official trailer is released today. Debutant actors, Yuvan, Ridhaan Krishna, and Anusha Suresh are playing the lead roles in this film. The trailer is packed with so much action and violence.

The well-cut trailer has numerous racing cars and the extraordinary visuals will make you go wow. The trailer is so promising and already got a tremendous response from the viewers.

KGF fame Ravi Basrur’s music and KG Ratheesh’s cinematography are the assets of this movie. Directed by debutant Dr. Pragabhal, Muddy is a much-awaited adventurous action film that is filled with action, adventure, and thrill.
The fact is that the film took 7 years to complete the shooting. The film is backed by the ace producer Dil Raju and planned to release the film in Telugu states in a grand way.

Muddy is a multi-lingual sports drama movie that is releasing on December 10th in 6 languages including Telugu, Tamil, Malayalam, Kannada, Hindi, and English.