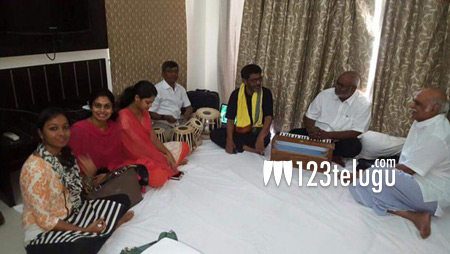 Music sittings have begun in Tirupati for Akkineni Nagarjuna’s next film in K.Raghavendra Rao’s direction. The film will be a devotional epic based around a saint and Lord Venkateswara Swamy and Keeravani is composing the music.

The film will be the fourth in this combination, after ‘Annamayya’, ‘Sriramadasu’ and ‘Shirdi Sai’. Raghavendra Rao has confirmed the development via his Facebook page and he even posted pictures of Keeravani and his troupe in session.

When Raghavendra Rao and Nagarjuna team up, the result is usually magical. Other details will be out soon.