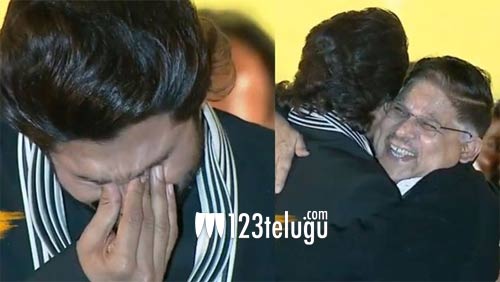 In a never before moment, Allu Arjun got emotional and teary-eyed as he spoke about his father Allu Aravind at Ala Vaikuntapurramuloo’s musical concert tonight. “After I became a father, I realized that I can never be a best father like my father. I hope one day I’ll become at least half of what my father is,” Allu Arjun said.

The Stylish Star started off saying that he has never thanked his father for all that he has done for him and his career. “For the first time, I want to thank my father. Daddy, I love you so much,” Bunny said, as he broke into tears.

Allu Arjun then said that his father deserves a Padma Shri award. “My grandfather got a Padma Shri and my father truly deserves one for all that he has done for Telugu Cinema. He has been India’s number one producer for the last 45 years. It’s my open request to the governments of AP and Telangana in this regard,” said the actor.