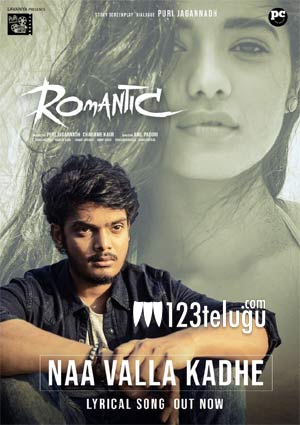 Romantic is Akash Puri’s second film after Mehbooba. The promotions of the film are on in full swing and a new song has been released today.

Titled Na Valla Kadhe, this song is a breakup number that has a lot of pain. Sunil Kashyap has made this song a soft yet emotional which showcases the pain that the hero is going through.

Bhaskar Bhatla has penned the lyrics for this song which has a very soothing effect on the listeners. The song is said to click well after we see the heartbreaking visuals on screen.

Anil Paduri directs this film which has been produced by Puri Connects in association with Charmee.