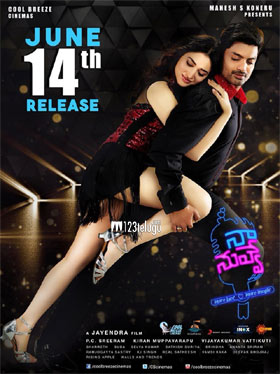 Nandamuri Kalyan Ram and Tamannaah starrer, Naa Nuvve, was earlier planned for a May 25th release, but got postponed to June 1st. Yesterday, we had reported that the film may postpone further due to a delay in the VFX work.

Confirming the same, the makers have just officially announced the film’s release date as June 14th. Kalyan Ram’s classy makeover and the breezy trailer have become a hit with audience and raised curiosity about the film.

PC Sreeram has cranked the camera for Naa Nuvve and Jayendra has directed the romantic drama. Sharreth is the film’s music composer. Cool Breeze Cinemas has bankrolled the movie in East Coast Productions banner’s presentation.