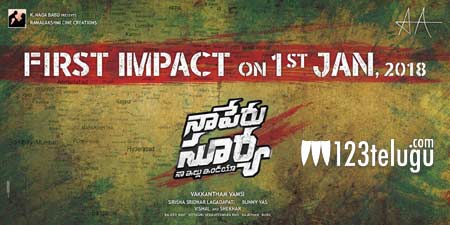 Here’s an exciting update on Allu Arjun’s Naa Peru Surya. The film’s makers have announced that the ‘first impact’ of Naa Peru Surya will be unveiled on January 1st as a New Year treat for fans. Whether this first impact will be a first look poster or a teaser will be known very soon.

Naa Peru Surya has a military backdrop and the Stylish Star will be seen as an army man. Popular writer Vakkantham Vamsi is making his directorial debut with this highly-anticipated social drama. The film is going to hit the screens on April 27, 2018.

Anu Emmanuel is the heroine and Action King Arjun is essaying a crucial role in NPS. Bollywood composer duo Vishal-Shekhar are scoring the music. Lagadapati Sridhar is producing the movie and Naga Babu is presenting it.