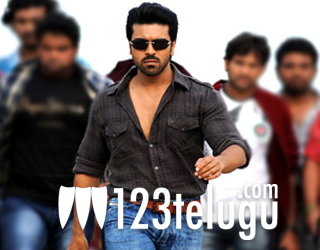 Mega Power Star Ram Charan’s ‘Naayak’ is gearing up for a release on January 9th and the last song of the film will be shot over the next few days. With this, shooting will be over and only post production activities will remain.

The audio album of the film will be released on 17th November at Ramanaidu Studios, Nanakramguda. Thaman has composed the music for this movie and V.V. Vinayak is the director. The film has Kajal Aggarwal and Amala Paul in the lead roles opposite Charan.

Naayak is doing good pre-release business and the Nizam rights for the film were picked up recently by Dil Raju for a whopping price in excess of 11 Crores. Danayya DVV is the producer of this movie.