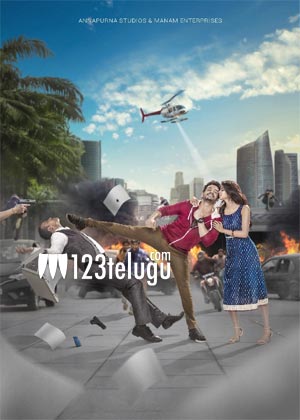 Yesterday night, Akkineni Nagarjuna took to Twitter and revealed the first look of his son, Akhil’s new movie in the direction of Vikram Kumar. Now, just a few moments earlier, he once again took to twitter and revealed a small hint regarding the title of the film.

Nag posted his famous song ‘Hello Guru Prema Kosameroi Jeevitham’ from his film and said that the title of Akhil’s film is derived from that particular song. The Twitter is a buzz with many options as some are saying that Premkosame Jeevitham and Hello Guru might be the titles.

But sources close to us reveal that ‘Hello’ is the title of the film as it has been registered in film chamber with the production house Manam Enterprises which is the banner behind this film. An official confirmation is yet to be made on this.

🤔guess @AkhilAkkineni8 's next movie name hidden in this iconic song? Watch out for the 2nd clue by @chay_akkineni & @Samanthaprabhu2 tom😊 pic.twitter.com/LtyWf8H1ju