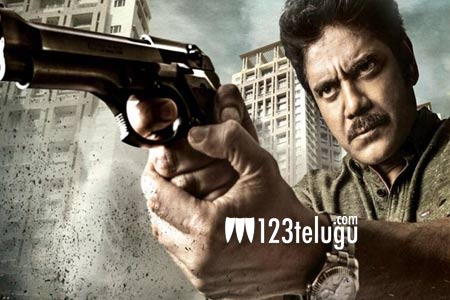 With less than a week before the film hits the screens, Nagarjuna and Ram Gopal Varma, the Shiva duo that joined hands after the 1993 film, Govinda Govinda, are stepping up the promotions for their upcoming action thriller, Officer. This morning, both Nag and RGV unveiled the Shivaji: A Sound Moment, a micro teaser which gives an idea about the sound design in Officer’s action sequence.

Shivaji: A Sound Moment showcases Nag, who’s playing a cop named Shivaji, sparring with another cop. RGV’s trademark high-speed visuals and mellowed and yet flamboyant Sunday design are the main takeaways from this Sound Moment.

Officer’s pre-release event will be held on May 28 in Hyderabad. The film is slated for release on June 1. Mumbai actress Myra Sareen is being introduced to Tollywood with the film.

A glimpse from #Officer 👉 SHIVAJI : A SOUND moment from @rgvzoomin’s #Officer – https://t.co/yEXv3sC7Pp