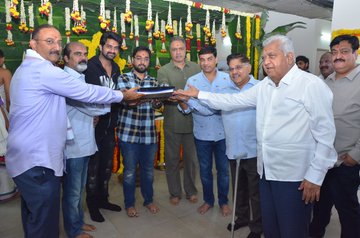 Naga Shaurya is a busy bee these days. After acting in an important role in Oh! Baby, the young actor recently wrapped up shooting for Ashwathma, and now, he has signed yet another film. His latest film is said to be a sports drama and it’s going to be directed by Santosh Jagarlapudi, who had earlier director Sumanth starrer Subramanyapuram.

The film was launched earlier today in Hyderabad and it’s expected to go on floors soon. Sharath Marar’s Northstar Entertainment, Narayandas Narang, and Ram Mohan Rao’s Sri Venkateswara Cinemas LLP are going to jointly produce the film. Talking about the film, Naga Shaurya said, “I’m quite excited about collaborating with Sharath Marar, Asian Sunil garu. We have been working on the script for six months, and I’m really looking forward to the film.”

Manoj Reddy is the cinematographer of the film, and the story and screenplay have been written by Santosh Jagarlapudi. More details about the film will be revealed soon.