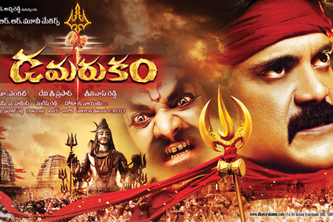 Nagarjuna’s magnum opus Damarukam which is all set to release this Friday, is going to be a visual treat for the audience. According to reports the visual effects in the movie are stunning and will create a huge impact on the audience. Already the trailers and music has created a lot of buzz among the cine goers. Damarukam is Nag’s biggest movie in terms to budget and other commercial elements. Lanky beauty Anushka is cast opposite Nag in this socio-fantacy, which is directed by Srinivas Reddy and produced by R R Movie makers. Though the movie has been postponed quite a few times, we hope that Damarukam would be a visual treat and satisfy all Nagarjuna fans completely.