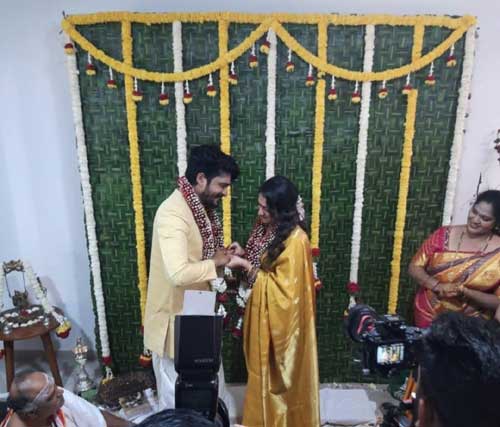 Talented Kannada actress Haripriya did a few notable films in Telugu, like Pilla Zamindar and Jai Simha. The actress was busy with Kannada cinema, whose famous works include Bell Bottom, Ugramm, and Kurukshetra.

It is known to all that she has been in a relationship with actor Vasistha Simha who played a crucial role in the KGF franchise. Vasista recently acted in a Telugu film named Odela Railway Station.

Today the duo got engaged in a private ceremony at the residence of Haripriya. The pics of the engagement are going viral on social media. Also, the duo shared a lovely image on their social profiles with the caption “US” and added a heart emoticon.

As per the reports, Vasista and Hari Priya met on a film set, and love blossomed between them. After getting approval from their respective families, the couple had their engagement today. Fans are showering their love on this happy news.