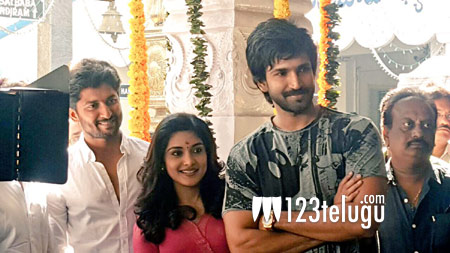 Talented actor Nani’s next film under the direction of debutant Siva Nirvanand and DVV Danayya’s production has been launched this morning, with star directors VV Vinayak and Koratala Siva directing the first shot and switching on the camera respectively.

This as-yet-untitled film will have its regular shooting from December 5th. Nivetha Thomas, the beautiful Malayali actress who stole the show in Nani’s Gentleman, will be romancing the Natural Star in this movie, while Aadhi Pinisetty will be essaying a crucial role. A majority of the film’s shooting will take place in the US.