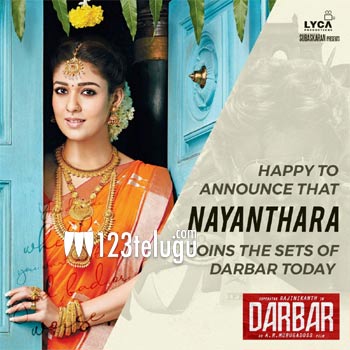 The shooting of Super Star Rajinikanth and AR Murugadoss’ much-awaited film, Darbar, kick-started in Mumbai around a week ago. Rajini has been taking part in the shoot since day one.

The latest update is that star heroine Nayanthara, who’s essaying the female lead opposite Rajini in Darbar, has joined the shoot today. While Rajini is said to be portraying dual roles in the film, details about Nayan’s role are still under the wraps.

Acclaimed cinematographer Santosh Sivan is cranking the camera for a Rajinikanth film after nearly 28 years since the release of Dalapathy. Lyca Productions is producing this high budget entertainer and Anirudh Ravichander is scoring the music.