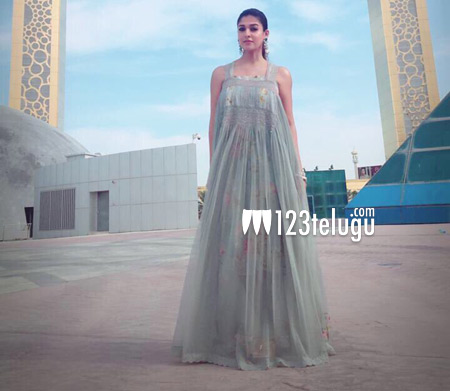 Nayanthara is being popularly refered as “Lady Superstar” and her recent films in Tamil certainly justify her moniker. She won rave reviews for her performance in Aramm and now, all eyes are on her upcoming Tamil film Vellaikaran in which she has paired up with Siva Karthikeyan.

Meanwhile, the actress was recently in Dubai to shoot for a romantic song for her upcoming Telugu film, Jai Simha. Directed by KS Ravikumar, the film also stars Balakrishna in a lead role, and it is being produced by C Kalyan.

Nayanthara’s look in the song is said to be her most glamorous in recent times and Neeraja Kona, who styled Nayanthara, is being flooded with compliments from the actress’ fans. The film is fast nearing completion and it is going to release for Sankranthi.