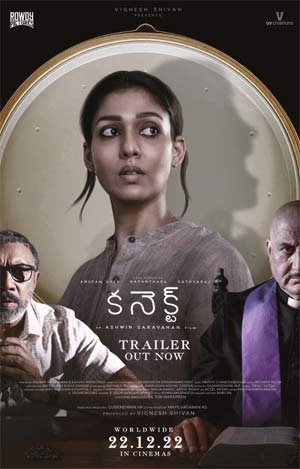 The much-awaited horror thriller, starring Nayanthara in the lead, is up for a grand release in theaters on December 22, 2022. Ahead of that, the makers have unveiled the trailer online.

Launched by the star actor Prabhas, the Telugu trailer of Connect promises a spine-chilling horror movie. Susan (Nayanthara) is a happy wife with a small and beautiful family. But, she finds a change in the behaviour of her only daughter during the national lockdown. With no other option left, she seeks the help of an exorcist (Anupam Kher) to know what happened to her daughter. Did she succeed in making her daughter normal again? What did happen to her? To know the answers, we need to wait for the main film. The camerawork and score make the trailer looks more intriguing.

Vinay Rai, Haniya Nafisha, Sathyaraj and others played key roles in this horror film, directed by Ashwin Saravanan. Produced by Vignesh Shivan of Rowdy Pictures, the movie will be released by UV Creations in Telugu. Prithvi Chandrasekhar is the music director of this film.