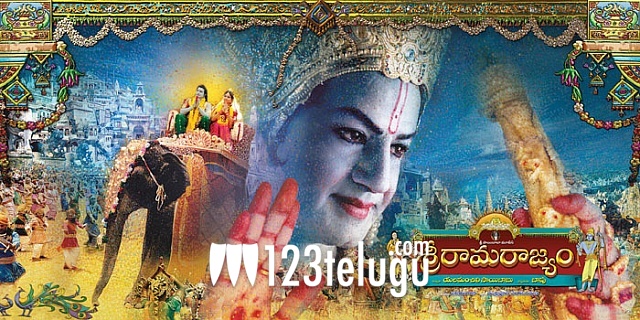 NBK true to his word is standing firm behind the Bapu-directed mythological masterpiece Sri Rama Rajyam. The movie’s 100-day function was held yesterday in Hyderabad. The attendees included ANR, Bapu, Murali Mohan and NBK himself. Nayantara was away on shoot and could not participate in the function. Speaking on the occasion the thespian actor recalled that his late wife did not want him to act in SRR as she wanted him to be by her side in what turned out to be her last days. But ANR said that he believed that Valmiki was the true hero of Ramayan and he wanted to act in the role in this phase of his career. Many people were seen trying to suppress tears. On his part, NBK said that he was inspired by the manner in which his father and ANR had essayed these roles and it was from that inspiration that he drew the courage to act in the movie. He also paid rich compliments to Bapu, Ilayaraja and Jonna Vitthula and said that this was a team whick knew its craft well.