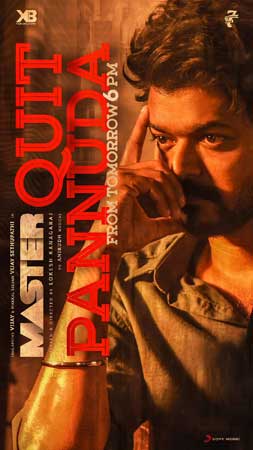 Tamil star Vijay’s Master is one of the most eagerly awaited movies of this season. The film, which was supposed to release in April second week, was postponed due to the lockdown. The makers are yet to formally announce the film’s release date.

Meanwhile, the fourth song from Master’s audio album ‘Quit Pannuda’ will be out tomorrow evening at 6 pm. Already, the three songs that have been released so far became huge chartbusters and expectations on Quit Pannuda are humongous.

Anirudh Ravichander has composed the music for Master and Lokesh Kanagaraj has directed the movie. Malavika Mohanan is the leading lady in this Xavier Britto