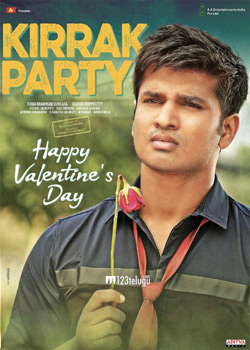 On the occasion of Valentine’s Day, the makers of Nikhil’s soon-to-release campus drama, Kirrak Party, unveiled a new poster of the film. The young hero is seen holding a dry rose and looks dejected. In a particular scene, Nikhil’s love is refused by a girl and he ends up as a love failure.

Kirrak Party is an official remake of the blockbuster Kannada movie, Kirik Party. Simran Pareenja and Samyuktha Hegde are the female leads in this youthful entertainer. Debutant Sharan Koppisetty has directed the movie, which has been bankrolled under AK Entertainments banner. The film is slated for release in summer.