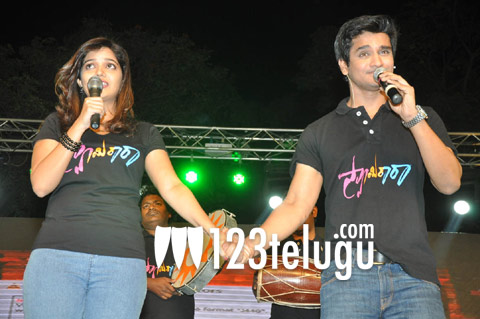 Nikhil and Swati have sung a retro song for their upcoming film Swamy Ra Ra. This is the first time Nikhil has sung a song for one of his films and he’s quite eagerly awaiting to see how the audience react to his attempt. The film’s audio was launched a little while ago in Hyderabad and several dignitaries and close friends of Nikhil from the industry graced the event. Nani, Allari Naresh and Manchu Manoj were some of the celebrities spotted at the event and Nikhil, Swati entertained the audience with their anchoring and they even sang a song from the film. Sudheer Varma has directed the film and Chakri Chigurupati has produced the film. Swamy Ra Ra revolves around the theft of a Ganesh idol and its consequences. Sunny has scored the music. The film is expected to hit the screens in mid February.