Yesterday, writer and producer, Kona Venkat put up a poll on Twitter asking the audience as to where they would love to see his upcoming film Nishabdham starring Anushka.

To his surprise, 56% of the audience chose to watch the film on the OTT platforms. The film has been postponed already thrice until now and there was news about the film coming out on OTT.

Irrespective of Anushka being in the film, the audience clearly wants the film to be out on OTT. Directed by Hemanth Madhukar, the film has Madhavan and Subbaraju in key roles. We need to see if Kona Venkat releases the film on the OTT platforms soon.

If u have to wait till January or February for theatres..
Where do u want to see NISHABDHAM ? 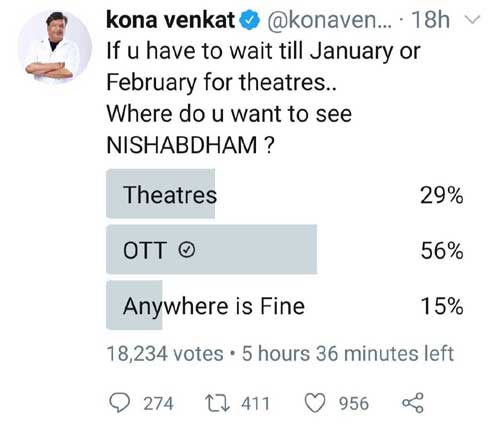